Some of our players do not compete in the larger, nationally rated events, but they like to keep tabs on their playing strength.  With our internal ratings they can do just that.

The NZCF ratings now appear three times a year.  But there can be a delay between games played and the new ratings appearing.

With our own ratings we can release a new rating list after each event.  Members can check out their new ratings online a day or two after the event for immediate gratification (or not!).

Blitz games are timed at less than 30 minutes per player per game.

After these 12 rated games have been completed, a provisional rating loses it's provisional status and becomes a full NCC Blitz rating.

The formulae we use to calculate provisional ratings are:

Players competing against Unrated or Provisionally rated players do not have their rating adjusted.  The game is considered "unrated" as far as they are concerned.

If a player has a NZCF Rapid rating, we will use that as their NCC Blitz rating.

Players with full NCC Blitz ratings have their rating adjusted using the Swedish rating system, where the difference in rating between two fully rated players and the result dictate how many rating points a player gains or loses for each game rated.

This table shows how full NCC Blitz ratings are recalculated after each game: 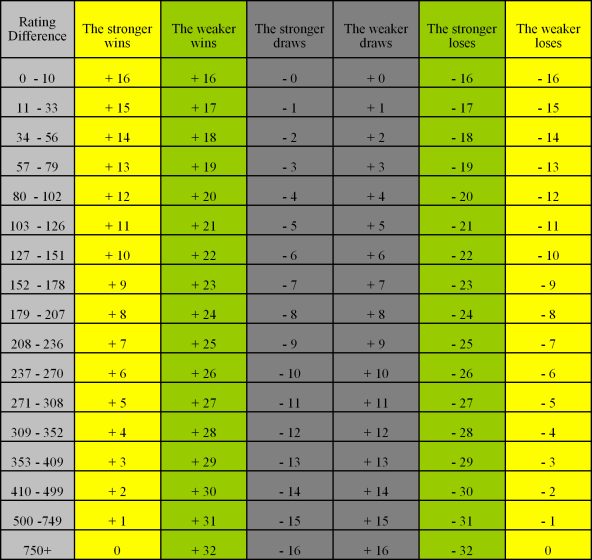 Standard games are played at 30 minutes or more per player per game.

If a player has no Standard rating, we use the same formulae as detailed above in the Blitz section to calculate a players Provisional Standard rating.

Full Standard ratings are adjusted by calculating the win/loss probability (based on the difference between the players' ratings) vs. actual result.

At no time can any player's rating descend below 500 points.  This is considered the absolute minimum rating a player may have if they are able to competently play the game of chess.